With the introduction of a 2 µm optical coating, Micro Laser Systems (µLS) have significantly broadened the available wavelengths their standard FC laser collimators can operate in. µLS can now offer collimators in four wavebands that cover the 350 to 2300 nm spectral range.

For more information, visit our Micro Laser Systems (µLS) pages, or contact us. 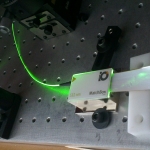 Integrated Optics UAB has expanded their range of MatchBox™ series CW Micro Lasers by introducing 445 nm and 488 nm models for applications in chemistry and biophotonics. The MatchBox™ series includes both DPSS and direct diode lasers with a wide range of output wavelengths – from 405 nm to 1342 nm – with either free space or fibre coupled outputs.

With a small, robust and easy to integrate form factor, which is enabled by the monolithic design and semi-automated precision assembly process, the MatchBox™ series has the best power, size, and price ratio in the market, making them ideal as a research-grade laser.

For availability and technical specifications of these lasers, please contact us.

Sprite-t™ is a new approach to ultrafast Ti:Sapphire laser design, providing the user with a host of features that maximise stability, reliability and productivity. Available in widely-tunable femtosecond or picosecond versions (models XT-F or XT-P), or broad bandwith XP model, Sprite is equally at home in a laboratory or an OEM environment. Download Sprite-t series datasheet.

For more details on these and other lasers from M Squared, please contact us.

A number of new datasheets have been uploaded to the relevant web pages on our site for Thales Laser LPSS – lamp pumped solid state – and DPSS – diode pumped solid state lasers. The new design of the datasheets reveal more about the applications the lasers are suitable for and make the specifications clearer and up to date.

For more information on the Thales and other laser products we offer, visit our laser pages or contact us.

Elliot Scientific is attending Photonics Ireland and SASQC11 next month

The first week in September sees Elliot Scientific attending simultaneous conferences in the Atlantic Archipelago. In Dublin on the 7th, 8th and 9th at the Grand Malahide Hotel, Photonics Ireland is taking place. Meanwhile, over in London, Imperial College are hosting the International Symposium on Attoscience and Ultrafast Quantum Control – SASQC11 .

Elliot Scientific will be present at both events. We will be partnered by Glasgow-based M Squared Lasers – known for their next-generation DPSS laser systems – in Dublin, and leading high-speed laser specialists FEMTOLASERS Produktions from Austria will be alongside us at Imperial.

The first week in September sees Elliot Scientific attending simultaneous conferences in the Atlantic Archipelago. In London, Imperial College are hosting the International Symposium on Attoscience and Ultrafast Quantum Control – SASQC11 – on the 7th, 8th and 9th. Meanwhile, over in Dublin at the Grand Malahide Hotel, Photonics Ireland will be taking place.

Elliot Scientific will be present at both events. We will be partnered by leading high-speed laser specialists FEMTOLASERS Produktions from Austria at Imperial and, in Dublin, Glasgow-based M Squared Lasers – known for their next-generation DPSS laser systems – will be alongside us.

New Symphony and Scherzo from KLASTECH are music to our ears

KLASTECH are releasing their second generation DPSS single-frequency continuous wave lasers over the coming months and first out are the new high-performance Symphony and Scherzo models.

With both operating at the significant 532 nm wavelength, these lasers come in a variety of powers – Symphony up to 1.5 W and Scherzo offering 50 to 300 mW, are OEM ready, and can be supplied with a choice of connectors – USB, RS-232, Ethernet etc. – for interfacing with a PC-based controller.

Symphony and Scherzo offer beam quality, power and control at realistic prices: outperforming many rival and more expensive offerings – and single frequency operation is included as standard! Contact us now for details.

Our highly qualified physicists, scientists and engineers can assist you with your product search or application. Many of the team have been with us for over ten years, bringing with them a huge amount of experience for you to tap into.